“Lose the clothes, save your life!”

With such eloquently stated writing on the back of the box, whatever could School Girl Zombie Hunter possibly be about? As a spin-off to the Onechanbara franchise, School Girl Zombie Hunter aims to titillate, but is it any good? The previous game, Onechanbara Z2: Chaos, while low effort in many ways, at the very least exhibited flashy combat that exceeded the level of depth you’d find in typical western character action games like God of War or Heavenly Sword. 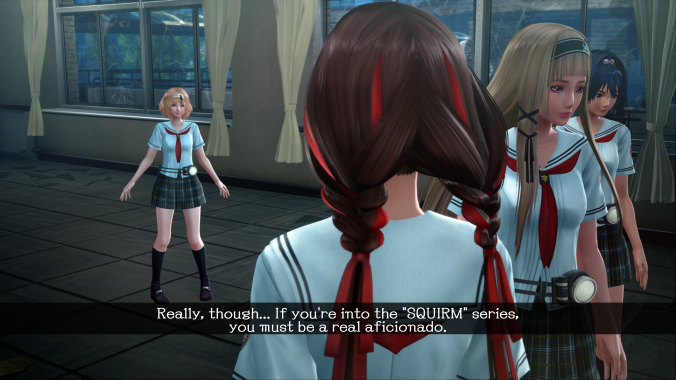 Unfortunately, the same can’t be said of School Girl Zombie Hunter. While the game may introduce interesting mechanics, the core shooting feels under-cooked with a horrible frame rate that exacerbates the less than optimal character movement and control. Despite running on Unreal Engine 4, the game looks about 10 years behind the times. Even releasing in this state in 2007, it would pale stacked up to the competition. Remember, 2007 was the year of Uncharted: Drake’s Fortune and Crysis. Regardless, it is a modest visual upgrade over Onechanbara Z2: Chaos. Tamsoft finally upgraded from PS2 era levels to mediocre PS3 environments.

With that said, for a Playstation 4 exclusive running on a modern engine like Unreal 4, its laughably outdated visuals make the performance profile all the more baffling. Low budget Japanese games are no strangers to poor performance, but even so, School Girl Zombie Hunter is one of the most jarring experiences I’ve had all console generation second only to Warriors All-Stars. It seems to target a 60 fps refresh, though it regularly drops below 40 frames per second, with minimums as low as what feels like the teens in extreme cases. Even on a PS4 Pro with boost mode enabled(it has no official PS4 Pro support from what I can tell), it runs like hot garbage. When we have console games like DOOM running at 1080p at a stable 60 frames per second on the standard PS4, performance like this stings even more. 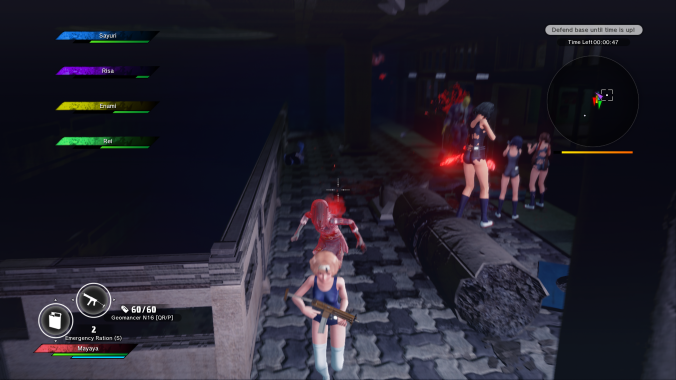 Unfortunately, fixing the frame rate wouldn’t solve much considering School Girl Zombie Hunter is a below average shooter at best. The game contains five playable characters throughout the roughly 4-5 hour story with each character providing different benefits. Rei is invincible during her melee animation, for example, while Mayaya reveals collectibles dotted around each level. The most interesting mechanic revolves around disrobing. Players can dress their characters in various outfits and even select the underwear/bra set underneath.

Pressing the touch pad rips the selected clothing, acting as a trap, enabling zombies to ignore the player and friendly AI. Underwear traps work exactly the same, though their effectiveness hinges on how long a character wears a set of underwear. School Girl Zombie Hunter tracks the amount of time each character wears an underwear set. Once ten minutes is exceeded, you can take a shower from the menu outside of missions, saving the dirty underwear as a single use item. The longer you wait to take a shower, the longer the underwear trap will last, capping out at one minute for thirty minutes of in-game underwear time. Traps are an underdeveloped throwaway mechanic that’ll make you chuckle once.

School Girl Zombie Hunter also contains a thin veneer of rpg elements. Completing missions rewards experience points with each level increasing a character’s health and stamina; a bar whose management is integral to sprinting, dodging, and performing melee attacks. Leveling up has an imperceptible impact on gameplay, though the loot drop system with several weapon types having different properties and effects adds depth to a game sorely lacking in meaningful content. It’s a shame then that with so many weapons containing variable stats, the game lacks a basic weapon comparison feature. Consisting of a by the numbers plot filled with archetypal anime characters and horrendous cinematography in addition to outdated animations, the loot drop system ends up being the single most compelling element of the entire experience rather than a supplemental addition to what should be the core shooting mechanics. The act of shooting things lacks satisfaction. All weapons, including shotguns, sniper rifles, and rocket launchers lack impact. Even dismemberment weapons(guns that automatically dismember enemies on contact) feel weightless. When mowing down waves of zombies, I felt like I was shooting spitballs at grown muscular men. Shooting lacks the sense of weight and player feedback necessary to make the violence truly gratifying. Even worse, the campaign recycles the same four maps throughout the entirety of its run-time. The budget apparently only allowed Tamsoft to render School Building A, School Building B, The Outside, and Underground. Some chapters mix things up slightly by opening up the ability to freely travel across both school buildings and the outer premises within the same mission, but at the end of the day, it’s still only four maps that are repeated ad nauseam. Within the first hour, you’ll grow tired of seeing the same backdrops. School Girl Zombie Hunter is a frustrating game. It follows a competent action game by the same developer just two years ago, but that’s not why it’s so frustrating. In the current political North American climate, low brow sexy games like this are unfairly dismissed by mainstream gaming media. Far too often, we see supposed “professional” reviewers give games poor or reduced review scores simply due to the reviewer being offended by said game’s representation of women or minorities, completely ignoring the actual quality of the game experience. Tamsoft has proven that they can make decent erotic games, but School Girl Zombie Hunter only adds fuel to the fire. Its poor level of quality and downright laziness serves as more ammunition for “politically correct” gaming journalists to justify their automatic condemnation of “weird Japanese games”. Even at a launch price of $40, School Girl Zombie Hunter is difficult to recommend, though if you find it on sale for under $20, it’s a passable mindless time waster for when you’re in that mood.