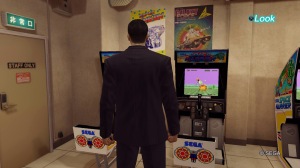 Eleven years after its western debut, 2017 has finally become the year the Yakuza franchise has gained a foothold outside of Japan. The series has seen a dedicated following, but it wasn’t until January 2017’s localized release of Yakuza 0 that the series finally struck gold in western markets.

Part of Yakuza 0‘s success at reaching a relatively large audience stems from the fact that it is a fresh start. As the “0” in the title implies, this is a prequel to the entire franchise, setting up events that lead into Yakuza Kiwami, a remake of the original PlayStation 2 entry. It’s never been a better time to get into Yakuza.

Yakuza 0 centers around the plight of Kazuma Kiryu after he is framed for the murder of a civilian, which brings unwanted attention to the Tojo Clan. Through a series of events, Kiryu finds himself excommunicated from the Yakuza, allowing him to act on his own devices. Unbound by the shackles and “code of ethics” of the family he once belonged to, Kiryu is determined to clear his name.

Comprising of seventeen chapters, Yakuza 0′s story alternates between Kazuma Kiryu and Goro Majima every two chapters. This structure provides a strong foundation for a multilayered narrative. What begins as two distinct narratives about two entirely different characters with seperate goals eventually morphs into a cleverly connected overarching plot that ties the seemingly disparate stories of Kiryu and Majima together. It’s this penchant for storytelling that remains Yakuza 0‘s greatest strength.

The game has a strong enough narrative to be worth the price of admission alone. Thankfully, the game underneath all this story is just as worthy, though for entirely different reasons.

While Yakuza 0 presents a serious narrative with incredibly dark scenes and well produced cinematics, it also presents its gameplay elements and mechanics through dissonance. 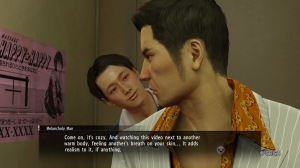 To begin with, combat in Yakuza 0 is ridiculous in the best way possible. Battles play out in a simplistic 3D brawler fashion with standard light attack combos and a heavy attack that can be utilized as a finisher for said combo. In addition, players can pick up random objects such as bikes, chairs, ashtrays, stun guns, and poles. Enemies can also be grabbed and punched or thrown onto the ground. Throughout combat, players will fill a heat gauge that has up to three levels. A level two and 3 heat gauge will allow heat actions to be initiated, which are essentially destructive special moves of sorts. These heat actions range from contextual animations such as knocking an enemy over a nearby ledge to jamming nails down his throat. It is excessively violent and works fine, but repetition starts to set 50+ hours in after witnessing the same thirty or so heat actions repeatedly.

As players earn money, they’ll be able to unlock new moves for each of the three fighting styles with a fourth style unlocking after completing Kiryu’s real estate management and Majima’s cabaret club side stories, respectively. 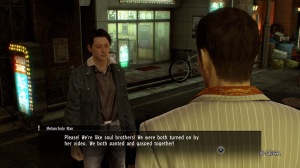 In other games, this tonal imbalance would be a detriment, but Yakuza 0 asserts itself with such confidence that players either learn to accept this dissonance or they don’t. Considering Yakuza‘s target audience, refusing to pander to western sensibilities is precisely what makes it such a success. It’s a representation of not only Japanese culture, but also its design doctrines with the west and the east adopting differing styles of game design and storytelling.

In the modern day, with more and more eastern studios like Square Enix acquiescing to western design sensibilities, it is a breath of fresh air to witness a game that flies in the face of contemporary design conventions. While the increasing trend in the industry has been to meld narrative and mechanics in such a way that they complement each other, Yakuza 0 says “fuck you. I’m a video game. I can be what I want.” to all of that. It is a deeply engaging narrative experience that also cements itself as an addictive video GAME by providing endless distractions that offer a reprieve from the story’s heavy themes.