Bioshock Infinite was one of 2013’s critical darlings, however after playing through the game multiple times, I couldn’t help but feel dissatisfied with the end product.

Let’s travel back to 2010. This is the year consumers saw the first ever gameplay footage of Bioshock Infinite and it looked amazing. The gameplay consisted of a short walk through a burned down city before leading into a battle against some crazed preacher and it continued to escalate. By the end of the demo, players saw Elizabeth conjure up a massive boulder consisting of miscellaneous objects to be flung at enemies by the protagonist. Shortly thereafter, Booker fends off a giant mechanized beast that looked to be this game’s equivalent to the Big Daddy. Audiences were subjected to a game that appeared to be targeting a deliberate mood with intense action set to punctuate that mood.

Then, the state of game remained dormant for a while until we saw it again in 2011. The 2011 footage gave us more insight into what we could tangibly expect from Bishock Infinite. We learned that an NPC would follow the player through the majority of the game and serve as an aid in battle. We saw a firefight in a huge open environment and we saw more of the sky hook traversal. 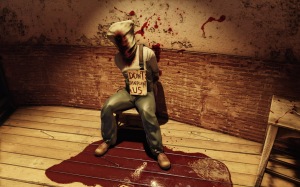 Unfortunately, much of the promise from 2010 and 2011 fell by the wayside. The developers promised highly intelligent AI that would react to her environment and situations around her along with what appeared to be a progression of Elizabeth’s character. In the 2011 footage, the protagonist pointed at a rift for Elizabeth to tear open, at which point she stated something to the effect of “I’m not strong enough for that yet”. What did we get in the final game? An AI buddy that sits down and leans against walls sometimes with very basic rift-opening options.

Unfortunately, Elizabeth’s AI and combat prowess wasn’t the only downgrade with environments being the biggest culprit. What we saw were open environments. We were promised an open world with a sky line system that players could use to traverse any part of the city. This is a far cry from the linear structure and cramped environments of the final build, not to mention the butchering of the skylines. In the version of Bioshock Infinite audiences got, the skylines served as either a straight path forward or they circled around obviously designed combat arenas. The organic nature of the early gameplay demos and even the original Bioshock was lost.

This brings us to the heart of the problem. Yes, Bioshock Infinite promised more than it delivered. Several gameplay and design elements were pared back due to the hardware limitations of the PlayStation 3 and Xbox 360, but that’s not the only sin to Infinite‘s name. Even if we were to excuse and forget what was promised, the end result still feels like a product that wanted to be more. Part of what made the original Bioshock such an enduring game is the connected nature of the world. A lot of care was put into making Rapture feel as organic as possible within the constraints of a first person shooter. Most of Rapture feels like a place that could have in its prime existed as a real underwater city. The gameplay, story, and environment melded together well enough to paint a convincing picture of this once great underwater city.

Bioshock Infinite eschews all that care and subtlety in favor of catering to the triple-A shooter space it seemed to be competing in. Some of the best moments of the original Bioshock were the quieter moments that allowed players to reign back in and observe the environment. Bioshock Infinite has very little of that. The game is littered with endless amounts of action to the point that the last 2 or so hours felt like a completely tacked on addition to meet some quota of “okay, the game needs this ratio of shooting things to not shooting things. Add more shooting.”

There are not enough moments that allow Bioshock Infinite to show its true colors as an intelligent piece of art. It comes very close on multiple occasions. Namely, the opening and the extended gameplay sequence with Elizabeth on the beach. Bioshock Infinite is a game that pined for less action and more story, but studio bigwigs funding the whole shebang said “nah, you guys have guns in your game so you’re going to shoot a lot of things, okay? We need these many confirmed deaths at the least”. Even if the game had more of the environmental storytelling and pacing that made the original so successful, it still would pale in comparison because of the level design. Nearly every environment feels like a very “gamey” video game level. It’s obvious to the player when a shoot out will happen and when the game will settle into a smaller moment. The disconnect between story and gameplay is a crux that cements the disappointment of Bioshock Infinite.

It was too afraid to show restraint. It had the potential to be a work of art on the level of something like a Team Ico project, but Irrational Games fell into the Triple-A trap of senseless action over intelligence and devolving organic environments into “gamey” levels. When people say Triple-A is ruining the industry, Bioshock Infinite is one of the prime examples for that argument.